In February 2018, we visited the Fukushima exclusion zone.
We have been to disaster areas such as Iwate, Miyagi and Fukushima which were affected by the Tohoku Earthquake and Tsunami in 2011.
However, it was our first time to visit the area where the Fukushima Daiichi nuclear disaster happened.
Visiting a place like that is not something fun or entertaining but it’s definitely worth a visit. It’s important to see the actual situation with your own eyes and understand what has happened and what we can do today for the future.

Read the updated article to learn more about the current situation in Fukushima.

Where is the Fukushima exclusion zone?

In 2011, The Great East Japan Earthquake occurred and Tohoku received a huge amount of damage from earthquake, Tsunami and nuclear disasters.
Many people now know “Fukushima” as the nuclear disaster area but this “Fukushima” doesn’t stand the same as Fukushima prefecture or Fukushima city.

As you can see in the picture, the nuclear exclusion zone is located only in the middle east of Fukushima prefecture. The magnitude 9.0-9.1 earthquake hit really hard and affected widely around the area.

One of our staff’s grandfather’s home was located in Miyagi prefecture at the time, but luckily the house didn’t collapse and they were safe. Even in Tokyo, we felt a strong quake and saw the furniture moving. There we saw damages on some houses from the earthquake also.

It was such a shocking image to see the huge Tsunami engulfing the area of Tohoku. It was surely a nightmare. Many people lost their lives. So many houses were gone. We could see only a barren field after that.

7 years have passed since we visited the area and could see the progress around the coast area since the locals put many efforts for the recovery.

There are three levels of restriction zone; 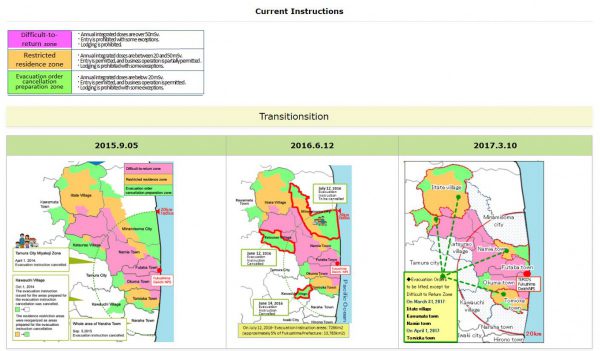 On 1st April. 2017, many areas where evacuation orders have been lifted.

Now only 2.7% occupation (371km2) of the entire area of Fukushima Prefecture is the evacuation designated areas.

What is in Fukushima exclusion zone

We visited the Fukushima exclusion zone which is about a 3 hours drive from Tokyo. Still recovery efforts are work in progress around the nuclear disaster area and many people work for recovery in the exclusion area. J village which used to be a national football training center is one of the base camps of construction companies now. (As of 2018)

As for the difficult-to-return zone, we basically are not allowed to enter this area. But its width is about 30km, so we could drive through the main road.

There are many houses along this road with a barricade. This means this area hasn’t been affected by the Tsunami disaster. The Japanese government decided to make it a difficult-to-return zone but they haven’t done enough nuclear decontamination in this area. So radiation is much higher than other areas. We measured the radiation dose with a Geiger counter and it’s less than 50mSv on that date.

We entered Evacuation order cancellation preparation zone which is located in Futaba town next.

The Japanese government has finished nuclear decontamination in this area.

So the radiation dose is nearly equal to Tokyo. It was really surprising for us because it’s just 4-5km away from Fukushima Daiichi Nuclear Power plant!

We found some broken houses which were hit by the Tsunami. Those houses are not yet demolished.

Areas where evacuation orders have been lifted on 1st April 2017

In the areas where evacuation orders were lifted on April 1st in 2017, we witnessed the threat of Tsunami, but at the same time we found rays of hope.

Here was the evacuation order cancellation preparation zone.
But now, there was nothing. Almost all the houses and buildings were demolished. That made us realize the threat of Tsunami.

But one building was still there. This was an elementary school.

The clock stopped around 3:40 when the Tsunami hit this school.
Fortunately all the students were safe, they took refuge in a safer place which is 2km away.

This is the Geiger counter and the radiation dose is nearly equal to Tokyo here, too.

Next stop is Namie Station.
This station restarted from 1st April 2017.

See the map of the JR line below. Left side of the arrow is not connected.
It’s under a difficult-to-return zone and not yet recovered.

In the west side of Namie town, the residence zone has been restricted until 1st of April 2017. But some people, especially farmers, decided to stay in the area because they couldn’t forsake their cows. Articles about Namie town

After March 11th, they couldn’t ship these cows to the market due to the radiation dose, but they still breed them. They love their cattles and they have been raising their voices against the Japanese government and TEPCO.

Namie town is located north of Fukushima Daiichi Nuclear Power Plant.
There is Tomioka town located in the south of Fukushima Daiichi Nuclear Power Plant which was also an evacuation order cancellation preparation zone until 1st of April 2017.
We could see some good signs in the area.
A supermarket already opened (opened on 30th March 2017), just before the evacuation orders were lifted.

And there are some houses around this supermarket. People are returning little by little. We bought some food in this supermarket to express our gratitude for their investment.

The Fukushima area is still in the process of recovering from the nuclear disaster.

We hope many people who want to live there can go back to their home in the near future.

How to get to Fukushima exclusion zone from Tokyo

There is not enough public transportation to the Fukushima exclusion zone.
But you can go to Tomioka town by train and there is a bus from Tomioka to Namie.

There are lots of rent-a-car shops in Japan.
If you rent a car, you can enter the Restricted Residence Zone and the main road of the Difficult-to-return Zone.

There are still some limited areas even after 10 years have passed. Taking a tour is the best way to understand the Fukushima exclusion zone, and the most convenient way to get around.

In Futaba Town which is one of the difficult-to-return zones, the restriction has been partly lifted and JR Futaba Station reopened in 2020. In Futaba Town Story Tour, the local guide will show you around the town and tell the history and background story of the town.
In the early summer in 2022, the evacuation order is planned to be lifted and the residents of the town can finally come back to their home. 10 years have already passed, and this tour is a good start to think about how the restriction can be made.
▶Futaba Town Story Walking Tour

Fukushima is a big prefecture which offers many tourist attractions. If you want to find out popular tourist spots in other areas of Fukushima, please check out our blog! Places to Visit in Fukushima

Fukushima Exclusion Zone Tour: Is it safe to visit in 2022?
Are you wondering if it's safe to visit Fukushima after the 2011 disaster? The answer is yes! Through this 2-day tour, learn all about the area and how far Fukushima has come in the reconstruction process.

blog.japanwondertravel.com
15 Things to Do in Fukushima Coastal Area ― 10 Years After the Disaster
It's been almost 10 years since the tragic earthquake with a huge tsunami hit and nuclear accidents caused in Fukushima...

The Three Regions and 10 Best Sightseeing Spots in Fukushima

Fukushima is one of Japan's biggest prefectures. Learn about its three distinct regions and all of its great sightseeing spots that make it such an amazing place!

Places to Visit in Fukushima

In Fukushima prefecture, there are a lot of Great East Japan Earthquake facilities that offer some insightful views and information on the matter. Here are 10 facilities you should visit!

An art district is an area that has been transformed into a photogenic area to increase it's value. Futaba Town in Fukushima has been trying to do this as a part of their recovery process since 2011. Check out some of Futaba's amazing art!

Michi no-Eki Namie is a roadside station located in Namie town of Fukushima prefecture. There are lots of cool and exclusive souvenirs you can only purchase here. Check out 10 of our favorites!

It has been 11 years since the Great East Japan Earthquake and Japan lost control of the nuclear power plant. Fukushima has come a long way but the recovery process continues. Here is our most recent trip to the Fukushima Exclusion Zone.
Sponsored links
Cycling around Nara – Explore Asuka Village by Bicycle
10 Best Things to Do Near Narita Airport
Home
Japan
Popular destinations Japan
Fukushima

10 Common Japanese Surnames
When is Golden Week in Japan 2023?: Travel Tips for Long Weekends
15 Typical Japanese Meals at Home and How to Cook Them
The Best Souvenirs in Japan
Tsukiji Fish Market: The Complete Guide

Please subscribe to get the latest posts from us!